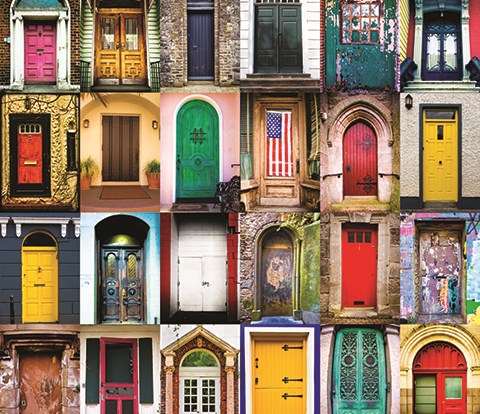 When I taught in a California high school for four years, one of the privileges given to seniors was the permission to use the front entrance to the high school. Freshmen, sophomores, and juniors hated the rule, and complained about it constantly. And they were right. It was a very stupid rule. It wasn’t a great privilege either. There were numerous other entrances, all closer to the main parking lots. I, for one, liked to use the other doors for quick exits at the end of the school day!

The “door” policy was put to a vote one of the years I was there, and I was sure the rule would be overwhelmingly voted against.

When I read the news lately, I’m reminded of that “front door” policy. One that shuts everyone out except for a certain privileged group. I started thinking about how this applies to so many other “doors.”

There are so many people who don’t want to give up any of their “privileges,” or even share them with others.

What would it hurt to have everyone come in through the front door?

What would it hurt to have medical insurance for everyone? We receive Medicare when we’re old, and it has worked very well. What’s wrong with Medicare for all?

What would it hurt to give up a little of a CEO’s salary to provide a living wage for their employees? The average CEO makes 335 times the pay of the average worker. Do the math. If someone makes $20,000 a year, then their CEO is making $6,700,000. And that’s the average!

Oh I forgot, trickle-down economics “works” so well. It’s just that not much trickles down to regular, middle-class people. And practically nothing to the poor.

What would it hurt to share “marriage” with same-sex couples? Why can’t an adult choose the person they want to spend the rest of their life with?

What would it hurt to let a few more people in the door to our country, especially those escaping violence, hunger, and devastation in their war-torn countries? Go ahead, put in a few rules, but add some kindness to the mix.

What would it hurt to keep children with their parents at the borders?

What would it hurt to make women equal to men in wages and job opportunities? And not have women endure the still-present sexism and harassment by bosses and co-workers?

What would it hurt NOT to call the police on someone because of the color of their skin, or the language they speak?

Some people are poor and uneducated, holding on desperately to what they have. I can understand that. Others are well off but still don’t want to give up one of their ten cars or yachts! And often these privileges are not even something they’ve achieved through persistence or hard work. It’s not a great accomplishment to be born with white skin, or to inherit money from your parents.

So back to the high school. I thought the rule would be voted against.

Not so. The seniors didn’t vote against it –– they had waited four long years for the dubious gift. But what surprised me the most was that the rest of the students voted FOR the rule. Even though they complained a lot, they knew that they would have the privilege one day –– and they didn’t want that taken away from them!

This is the only explanation that I can even think of for the immense selfishness of our leaders and their followers in our country: Hold onto everything you have, whether its pennies or millions. Hold onto what you’ve been given, because somehow you deserve it more than anyone else. Hold onto it tightly. It’s yours, and don’t dare let anyone else share it, or even have the smallest part of it.

Don’t let anyone but “us” in that front door!