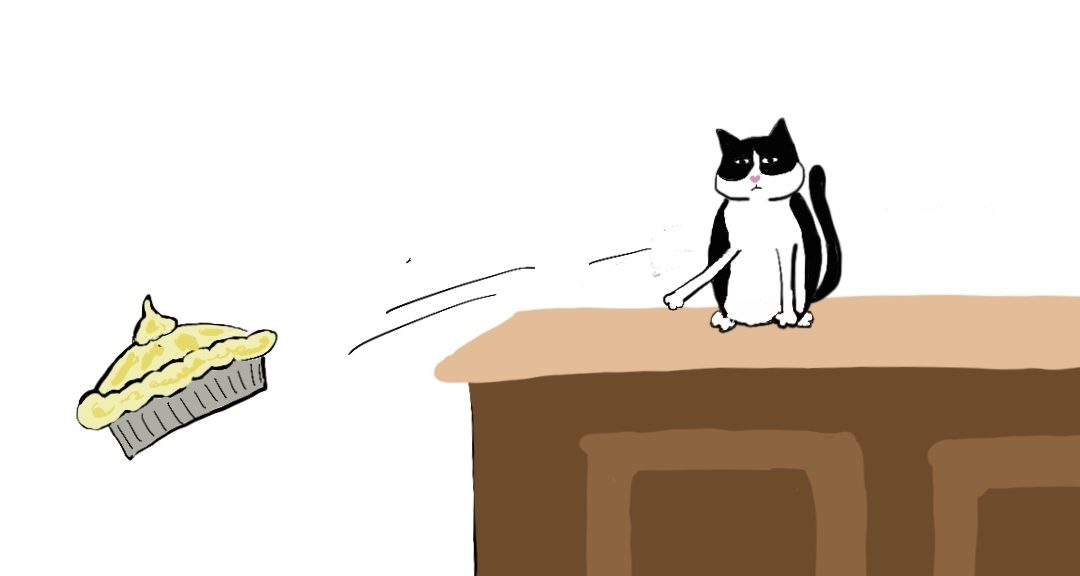 (“Ralph and the Lemon Meringue Pie” • Illustration by Heather Small, my daughter-in-law)

I’ve heard that two of the saddest and most depressing things about aging are boredom and lack of companionship.

I turned 70 last month, but I’ve never experienced either one of these, and there’s a reason why.

I have two cats, Walter and Ralph, and one Golden Retriever named Sunny.

Sunny starts off the evening on the floor, then the dog bed, and finally graduates to the couch in the bedroom at about 1:00am. Then she starts scratching the couch cushion to make it more comfy. The sound is very loud in the middle of the night and wakes my husband and me up. Sometimes just one of us wakes up ––but the other will soon be awakened by the other yelling at the dog.

Putting her outside the bedroom is just fuel for her bad habit of barking at strange sounds in the middle of the night. She seems particularly concerned that a small gang of little white dogs might bust in and burglarize the house. A real burglar would be greeted with love and sloppy kisses.

I get up in the morning, not too refreshed, and always feed the animals before my breakfast, not because I’m that kind and generous, but in self-defense.

As I sit on the couch with my oatmeal and hot chocolate, my cat, Walter, visits me. Walter gives a lot of love –– and takes a lot, too. He doesn’t just sit on my lap. He spreads his 18 pounds of very gelatinous love stretching from my chin to my lap, making it very difficult to drink or eat anything. Meanwhile Ralph hovers by my head, patiently waiting, a tap of the paw every ten seconds, reminding me that he’s still there. And Sunny, never mind that she’s already eaten, knows that I have something much better, her head resting on my knee, saliva flowing from her mouth.

When Don and I were younger, we had golden retrievers who tended to be lazy and content. Now that we’re old, we managed to rescue a dog that has boundless energy, who outruns almost every dog at the dog park, and never stops. Bark and run, bark and run. She is not a dog for retired people. And if she doesn’t get the required amount of love, there’s always the patented golden retriever look, guaranteed to melt your heart, or at least make you think twice about yelling.

She is fearless. She sleeps through fireworks and loud bombing exercises at Camp Pendleton. There is only one thing that she fears. No, not death or taxes; but when Walter sneezes, she runs and cowers in fright. We have no explanation for her fear, so if you know of a good dog psychologist, let me know.

I do feel sad for elderly people who are lonely and bored. I will invite them over.