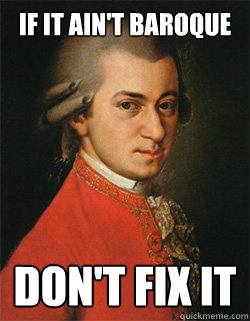 When I was five years old, I started taking piano lessons from a kind old lady named Mrs. Sale. At least, I think she was old. I was only five, so she could have been in her late thirties, and I would have thought she was old.

I learned where Middle C was right away, and how to recognize it on the staff and the piano. I had a harder time when I got to a F#. I just didn’t get it, and after lots of tears the next few weeks, my mom wisely had me stop lessons. I was just too young.

I couldn’t stay away from the piano though. Either I loved it or there wasn’t much else to do at home, so I started taking lessons again after a year. Music became a huge part of my life. As a classical pianist, I’ve played concerts, played for choirs, been a music director for a large church, and taught piano for innumerable years.

When I taught piano, I would always emphasize the fact that once you learned Middle C, where it was and what it looked like, it would never change. It would always be the same!

What a huge contrast to technology today. I bought a new Apple computer last month, and it took my whole family, including an engineer who writes software, a creator of synthesizer modules, and an IT expert at UCLA almost two weeks to get the computer working. This was including five hours of phone help from Apple!

My computer is working now, but I’m still upgrading and connecting all the apps. I still have to get Spotify to talk to the computer and Alexa, get my wave files on SoundCloud, set up Google Home so that it speaks to my computer, my phone, and my iPad. I’m not convinced that they all like each other. It’s terrible when family members aren’t speaking. But it’s equally frustrating when my electronic devices don’t want to talk to each other. I’ve tried counseling (mostly in the form of expletives), but it doesn’t seem to work.

And soon will come the inevitable day when I get the message, “Software Update!” on one or more of my devices.

No, not again, I’ll silently plead. A whole new set of rules to learn. And I’m getting old. I just learned all the rules –– I don’t need any new ones! Like, the newest iPhone doesn’t have a home button; my computer doesn’t have a CD maker anymore; and someone removed the headphone input on my phone. These are all upgrades? To me, and I’m sure I’m not alone in this, they are disruptions to my already tenuous techno status quo.

I’m sitting here at home looking at my beautiful Steinway grand piano. What if it had updates every few months? Here’s a new staff. Middle C isn’t where it used to be. We decided it would work better as an F. Everything is moved up four notes. You’ll get used to it. It’s so much better in the long run. And now, we’ve changed the staff to six lines and five spaces!

Or what if they made version 12.9 of the piano keyboard? Fewer keys, fewer problems –– with wrong notes!

What if they took away all those black keys? They were just in the way, as well as being somehow politically incorrect, taking their names from the white keys! But wait . . . now there are only white keys. That’s not good either!

Can you imagine how terrible it would be to learn a whole new keyboard and staff –– and revise hundreds of years of music to fit the new guidelines?

I realize that I love my piano because it never changes. That’s not the only reason, of course. It also makes beautiful music. And no matter how many new pieces I learn, Middle C is always there –– and in the same place. And once I figured out that pesky F#, it remained the same. It has for the last 300-plus years.

Yes, change is good. I realize that. But sometimes those things that stay the same can be pretty wonderful too.