Haggis and Neeps and Tatties 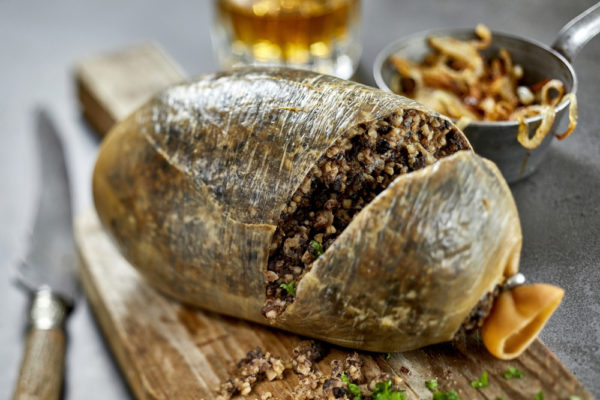 I have loved every moment of my visits to Scotland, and now that we have an adopted set of relatives there courtesy of my daughter-in-law’s mother, it’s even more special. Even though I’m Irish and German, I felt an immediate affinity for Scotland. The land is wild and green – a beautiful sight for us poor rain-deprived Californians – and it’s dotted with lochs and old buildings and real castles. And rain.

But if you’re going, and I would definitely recommend it, here’s a little advice:

First of all, you might think you’re going to a country that speaks English, and you’ll be perfectly at home. Well, I taught ESL (English as a Second Language) for a few years, and I can spot a foreign language when I hear one. One afternoon we sat in a bar, owned by a relative, and met the family. We spent time talking to Clyde – or rather, just listening. I hardly understood anything in the three hours we were there. It was like my ESL class, the difference being that my students KNOW they can’t speak English. Edinburgh wasn’t bad at all, but in Glasgow, I wanted to hand out lesson plans and help them!

I think I may have agreed with many things I don’t really agree with, and I’ll probably have visitors at my door soon, because I said ‘yes’ to things when maybe I should have said “we’ll see.”

I do remember some talk about a barrow sale. It was kind of like a swap meet where people would bring all sort of things to sell in wheelbarrows. I remember very clearly that he said people sold false teeth in wheelbarrows and people would pick them out and try them on till they found ones that fit. Even though Scottish IS a foreign language, that was a conversation I will always remember.

I had visited Scotland a few times earlier in my life, on tours, and I thought haggis and neeps and tatties were just for the tourists, a taste of Scotland. All the places we stopped on our bus tour were “tourist” destinations. But when we went with family, I discovered that people – real Scottish people – actually eat these things.

Haggis, if you haven’t been lucky enough to try it, is the innards of sheep made into a sausage-like mixture with oatmeal and cooked and served in a sheep’s stomach. THIS . . . is the national dish! You see it hanging in the window at butcher shops! Yes, I know, delicious!

Neeps are rutabagas or large turnips. Tatties are a mashed potato-like substance. Both were also favorites of the locals.

It’s a major accomplishment to eat an entire Scottish breakfast. In the US, there are large eggs on the plate, surrounded by a few bacon slices or a couple of sausage links. In Scotland, most of the plate is filled with sausages and bacon with a mere tablespoon of egg in the middle. There are Scotch eggs, a little haggis or different kinds of sausage, black pudding or blood pudding (google it!), grilled tomatoes, bacon, toast, mushrooms, and baked beans. It was quite a chore to get through it by lunchtime.

Of course, being an island, the fish is delicious, especially fresh salmon and trout. And since there are so many sheep, the lamb is wonderfully served.

But haggis was everywhere – in every pub, every restaurant, except Starbucks, thank God. There were haggis main courses, baked haggis, haggis pizza. And the ultimate: haggis sliders.

And don’t forget, if you’re still hungry, you can have the deep-fried Mars bars for dessert. I have never tried one of those. They are the ultimate in Scottish food contributions to the world, but I just couldn’t get myself in the mood to actually try one. I never tried Irn Bru either, a different tasting soft drink that has outsold even Coca-Cola in Scotland for the past century!

Confession: I ate a lot of fish and chips during my visit, and thoroughly enjoyed them!

There’s a lot more to Scotland than the language and the food, but if you do happen to travel there, you may be grateful for these simple warnings.