If Jesus Were President 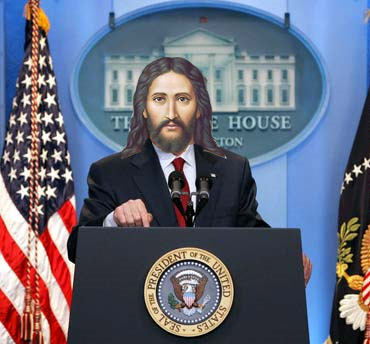 But having been a Catholic for 38 years, and a nun for 6 of them, I do know something about Jesus. Or at least the values that Jesus represents.

Let’s see, born in a stable to working-class people. We don’t hear anything about his younger years, but he was certainly poor. He didn’t have his father’s wealth to rely on.

But let’s get to what’s really important, the things he said as an adult.

Jesus said in the Sermon on the Mount,”Blessed are the meek, for they will inherit the earth.”

The president we have now is pretty much the opposite of meek. He is the perpetual star looking for adulation, self-promoting, narcissistic, and power hungry. I’m quite sure he would make fun of anyone who was meek, calling them a loser.

Jesus also said,”Blessed are the merciful.” Taking children away from their parents, no matter what their legal or social status, is not merciful. Not even close. And separating some of them permanently, and holding them in camps, with no hope of ever being reunited with their parents –– we’re talking about children here! –– is merciless.

Jesus also mentioned another thing. “Blessed are the peacemakers, for they shall be called children of God.”

Peacemakers don’t threaten other countries by saying, “We will totally destroy you,” increase levels of nuclear weapons, or dismantle long- held treaties with allies. Peacemakers don’t respect and honor totalitarian dictators such as Putin, Kim, and Duterte, and compliment a Chinese leader on being declared president for life.

And we haven’t even started on the Ten Commandments.

“You shall not have other gods before me.” Hmmm, like money or power?

“You shall not commit adultery.” We already took care of that one.

Here’s a good one. Down on the list, toward the end, but still important:

“You shall not bear false witness.”

Which is simply a way of saying,”Don’t lie!”

I don’t think Jesus would have cared for Trump’s daily lies. We’re not even talking about opinions here, we’re talking about blatant, provable lies. Starting way before the inauguration.

On Mexican immigrants, “They’re bringing drugs, crime, and are ‘rapists.” “The crowd at my inauguration . . .,” etc., etc. It has been proven that Trump has made about seven false statements every single day of his presidency. And that is a fact –– not a lie.

Here’s another thing I know about Jesus. He was Jewish, and He was a whole lot darker than the milky-white depictions of him throughout European history. He probably looked Middle-Eastern because that’s what he was! Wow, with looks like that, no one would even let him into this country anymore.

Ah, if Jesus were president. As an atheist, I’d have to say that this country, and the whole world, would be a lot better off. Maybe the economy wouldn’t do quite as well, the stock market might go down, and some CEO’s might have to sell off some of their yachts due to their increased taxes, but there would be hope for peace, the preservation of our earth, a solution to global warming, less hatred, and no lying. There might even be more income equality, and a better standard of living for those at the bottom half of the wealth scale. There would be so much more compassion for those in our world who have no voice. There would be kindness.

Jesus’s values have always appealed to a large segment of humanity. However, the ones who actually live by his values is surprisingly small. It’s very easy to say you’re a Christian. It’s a lot more difficult to be one.

But I would welcome Jesus with open arms, try to work with him to bring out the best in our country, not the worst. If only Jesus were President.