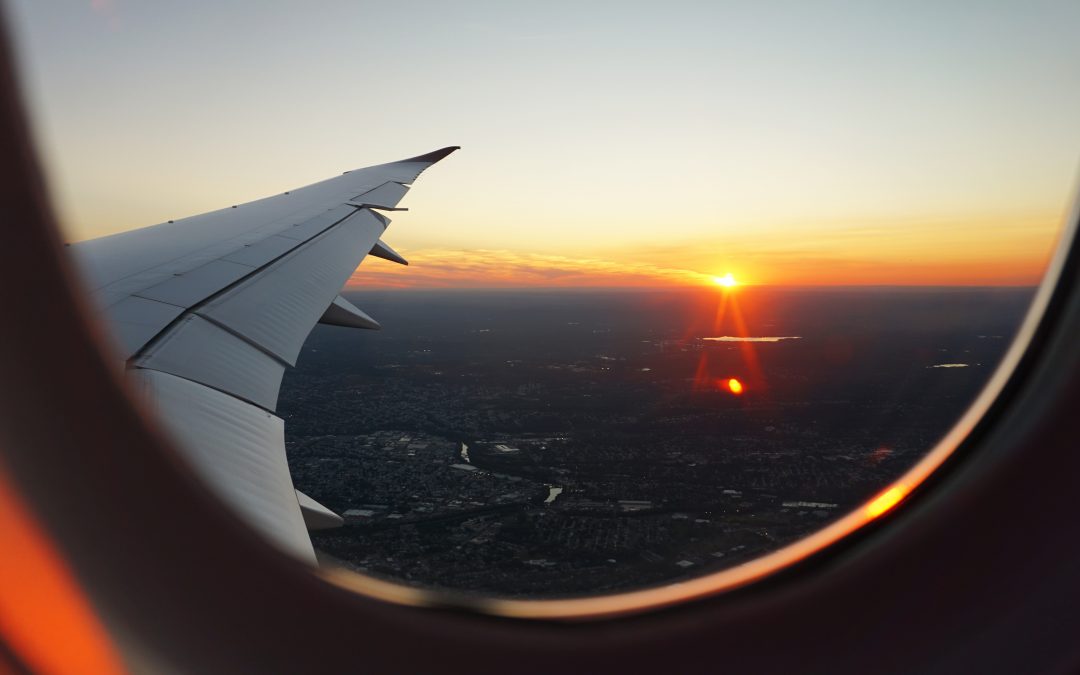 We left Frankfurt at 10:00 am on a beautiful clear day. Our flight was scheduled to land at JFK in 10 hours and then on to Los Angeles. Because we had booked the flight at the last minute, Don and I had gotten seats in the middle of the airplane. They were all we could get.

Even before take off, almost everyone had closed the shades on their small windows. But the person by the window in the row behind me to the left had hers open. I turned my neck and stared past her to the window so I could see the plane take off.

She probably thought I was some old-lady stalker so I tried not to look too often. A few minutes after the plane got in the air, she closed her shade, too.

The entire plane was dark, except for the overhead lights. And it was morning! Not time to sleep yet, people!

I wanted to see outside the windows – the world was racing by at 600mph. Clouds, glimpses of Germany, England, the Atlantic Ocean.

People were all looking at the screen in front of them or down at their devices. Most had on earplugs, listening to whatever kind of music they enjoyed.

I couldn’t understand it at all. Is it because I’m old? I don’t know. I don’t think so. I’ve flown a lot. But I still love to sit by the window of a plane and watch the incredible power as the plane reaches enough speed for take off. Then after we’re in the air, suddenly banking and seeing the world below, whether it’s cities or green countryside, ribboned with rivers and dotted with blue lakes. And then the clouds. There’s an infinite variety of them. The fog, which envelops the plane in grey and the huge cumulus clouds which stretch all the way to the horizon, thousands of feet above the plane.

Below I can see patchwork greens, tans, and browns, towns and villages that, up here, have no names. Then I look to the clouds again. On one flight there were hundreds, maybe thousands of clouds, stacked up like three scoops of vanilla ice cream that stretched as far as I could see.

Yes, on a long flight leaving at the crack of dawn, I can understand that sometimes the sun is too bright. Sometimes you want to sleep. Close your windows then. But I want to see the sunsets and sunrises over the ocean, the clouds turning pink and orange, then finally fading to grey as darkness races behind us.

I want to see everything. I don’t want to shut my eyes.

I wouldn’t be at all surprised if some of the people on the flight were watching a video on their phones, eyes glued to the screen, entitled, “Sunset at 35,000 feet over the Atlantic!” Ignoring the reality that’s right outside their windows! It wouldn’t surprise me at all if it had 4.3k likes and everyone shared it because it was so magnificent.

Next time, I’m getting a window seat! And I’m going to stare out that window for all nine hours of the flight, no matter what’s above me or below me –– or who’s next to me!