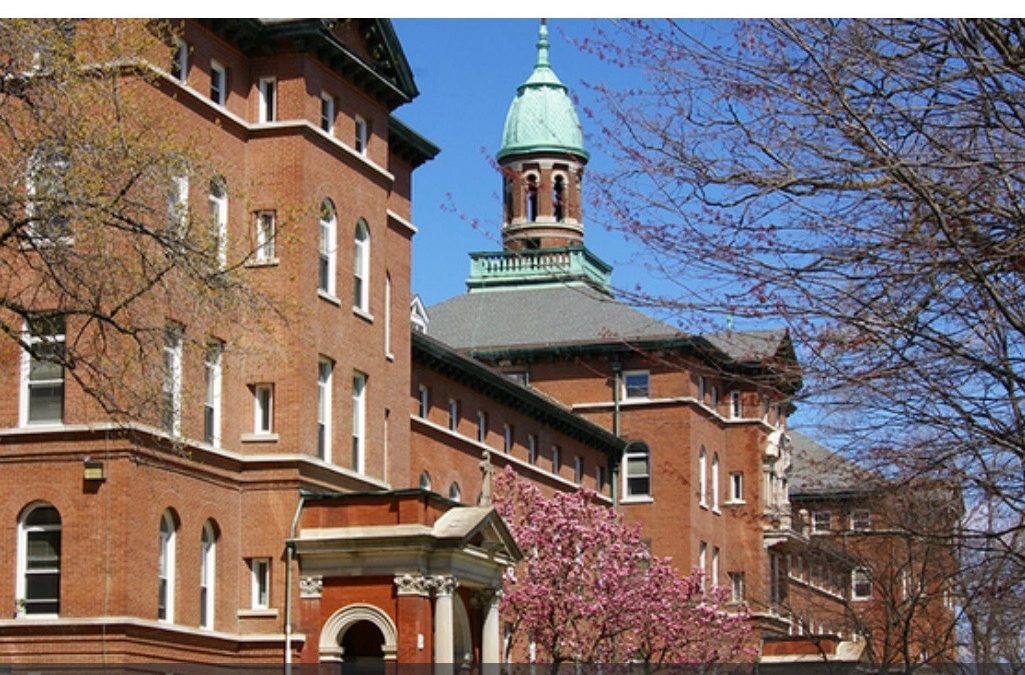 Sister Miriam’s scratchy voice penetrated the walls of the study hall. It was Christmas Eve, and all of us first-year nuns, called postulants, had been sitting obediently at our desks. Suddenly, we were being herded to bed like reluctant children, so we wouldn’t get sick when we got up for Midnight Mass. We were eighteen years old and had all stayed up late a few times in high school, so I didn’t understand this insistence on going to bed early. There were a lot of rules at the convent that I didn’t understand.

The 32 of us stood up and filed out of the room, up to our dorms for a few hours sleep. I hung back a little till I was next to my friend Joanne Garcia, a Hispanic girl from California.

I whispered, “Let’s go up to the bell tower.”

She opened her eyes wide, then nodded. Those Californians would do anything! We slowed down till everyone passed us and then walked quickly down the 4th floor corridor toward the bell tower.

The motherhouse was a huge brick building the size of a shopping mall. As beginning students, we lived in a small section of the building, but most of it was off limits because we weren’t real nuns yet. But I knew where the restricted door to the bell tower was. I only hoped it wouldn’t be locked. I was busy thinking of excuses about why we were in a forbidden part of the building, but we didn’t see anyone up and down the long hall.

Unseen, we got to the door. It was unlocked. Joanne and I scurried in then slowly closed the door behind us. The latch bolt clicked. In the silence, the sound seemed to echo down the empty corridor. I turned on the one dim light bulb and could see the large rope hanging down to the floor in the middle of the tiny room. A nun would ring the bell every day at noon and at 6pm for the Angelus and other prayers, but I wasn’t planning on ringing it this night! We would have gotten kicked out for sure. Even on Christmas Eve.

A circular wooden staircase wound around the rope, and Joanne and I started climbing. I held my long black skirts up with one hand –– the other hand clutched the thin metal rail. I whispered, “Don’t touch the rope!” but then I tripped and almost grabbed it accidently.

The temperature was in the thirties outside, and it was freezing in this room, but I was sweating. Joanne was behind me cursing in Spanish. At least it sounded like cursing. My Spanish wasn’t very good.

We managed to get to the top without tripping or falling, even though the steps were made for a size-three shoe. In the dim light, I could see the little trapdoor that led to the roof.

Only a few more steps. I pushed it open and climbed out. Joanne followed.

“Don’t close it! We have to wedge it open with something!” We found a half a brick and held it open with that. The roof sloped down on both sides, but there was a level section next to the bell where we stood.

The sky was dark and full of grey clouds. The soft snow drifted down gently. The roof was already white, and our black habits captured the snowflakes as they fell. Joanne had never seen snow before, and she suddenly stopped cursing and stood up and twirled in the snow, excited about each snowflake.

We tried to find the prettiest ones.

“Look at this one.” I held out my arms and caught as many snowflakes as possible.

“Oh look. Mine’s better. This is so beautiful. I never knew snow looked like this!” Joanne was thrilled.

It was quiet, and the clouds muffled any noise from the city. We could see down to the Mississippi River, with a few barges flickering their red and green Christmas lights through the falling snow.

I could see the lights on the houses in the distance. They twinkled off and on until the grey clouds swallowed them. I stood there in awe of the beauty around me. Right then, the world was so quiet, like the Silent Night of a century ago. We stood there shivering in the cold and wind and snow, but neither one of us turned to go back inside. We didn’t say anything, just drank in the beauty around us. After a while, I couldn’t feel my nose any longer, and I was starting to shake. But I caught a last look at the distant river, the red and green lights on the barges moving slowly with the current, and the snow peacefully dancing and swirling in the dim light. I knew that I would always remember my first Christmas away from home.

PHOTO: This is a picture of the real bell tower from this story. And this story is from my upcoming new book “Kicking the Habit,” stories of my convent days, coming in 2019.